The working area of the program is divided into several windows, the sizes of which can be changed by the user by dragging the borders. 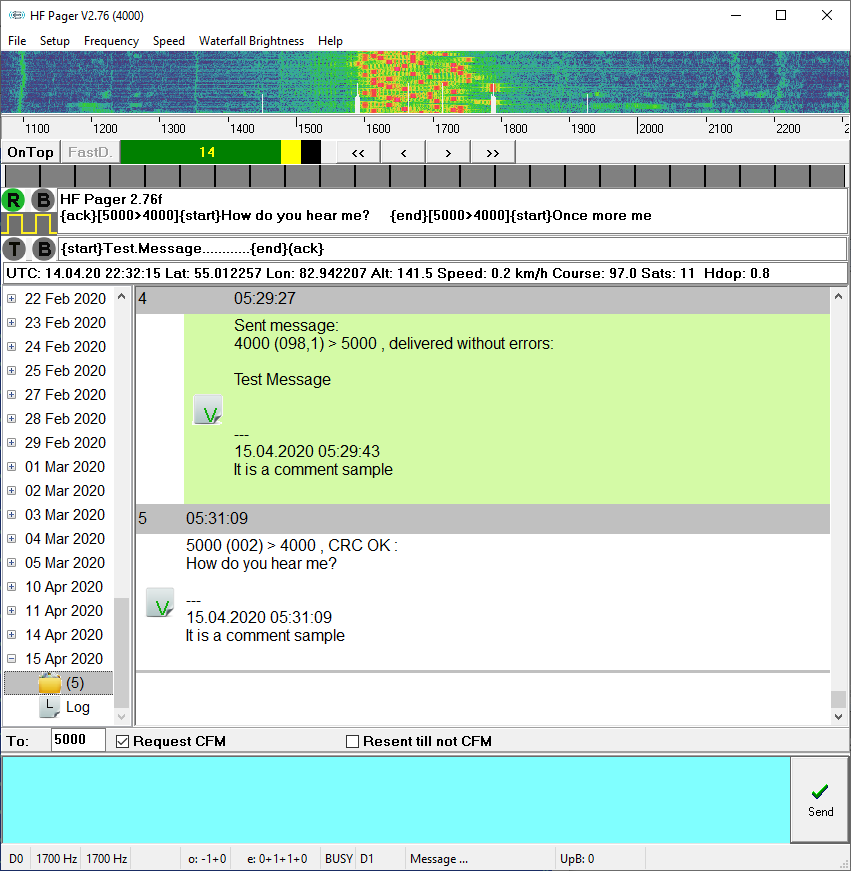 In the top window the current spectrum of a signal in waterfall view are shown.The vertical thin lines in this window show the frequency limits of the RX filters.

Ruler under top window shows frequencies of sound spectrum. RX and TX frequencies and shifts are also shown in the status line.

The center frequencies of the transmit and receive can be changed by the "Frequency" menu.


The "Speed" menu allows you to select one of two possible TX speeds. The program receives signals with both speed simultaneously.

The "OnTop" button puts HF Pager in front of all windows.

HF Pager can decode signals from a WAVE-file. Desired file is selected by the "File->Decode From File" command.
A WAVE-file must be Windows PCM file, without compression.
The "File->Stop Decoding From File" command is used to abort of decoding.
The "FastD" button defines speed of playing a file during decoding. When button is pressed a file is decoded at maximal speed, spectrogram is not shown.

To the right of the "FastD" button is a three-color peak indicator of the received signal level. The number in this indicator is the number of significant bits of the signal. The red color of the indicator (15 significant bits) indicates an overload of the sound card, the input signal level MUST be reduced. Yellow color (14 bits) is the optimal level, the dynamic range of the sound card is fully used, but there is no overload.

The line of gray, yellow and green rectangles shows the results of test messages used for channel monitoring (beacons) receiving during the past four hours. Read more  below.

Below are text fields which display the process of receiving and transmitting and  graphical indicators.

The upper left indicator is activated when a message is received:

Body of simple beacon is received.

Body of beacon with GPS-data is received.

Body of message with corrupted header is received.

The indicator to the right (letter B on a yellow background,  BUSY)  - shows that the channel is busy, there is a pause after receiving a message or its header.

The indicator in the form of a meander below shows the presence of a received signal (more precisely it shows a stable symbolic synchronization).

The indicator in the form of the letter T on a red background is activated during transmission,
another B on a yellow background to right shows a protective pause which is made after a transmission.

Received and sent messages are displayed below: 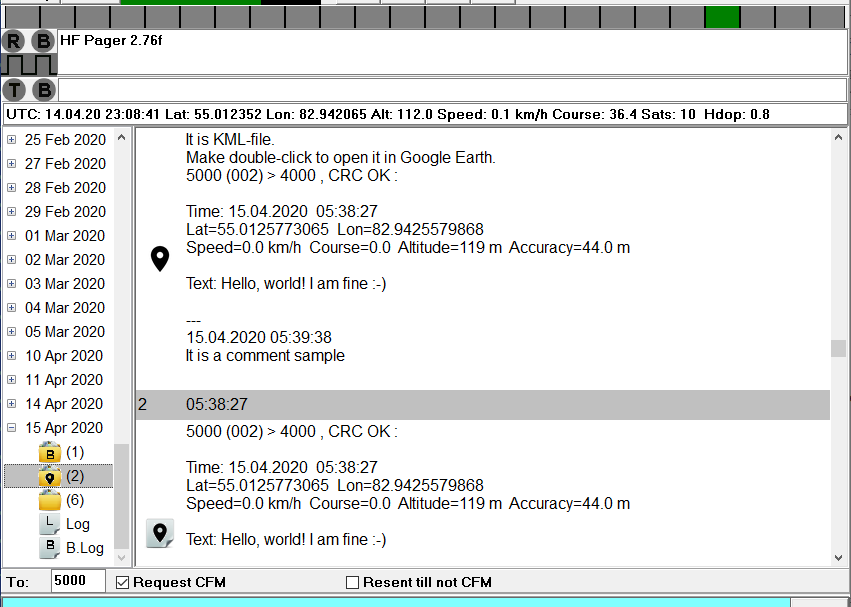 folder
together with the usual beacons,  and twice to the

folder,
as plain text and as a KML file. The messages in this folder are marked not by receiving time, but by time of the GPS-fix.

- "channel control" history per day in a graphical form: 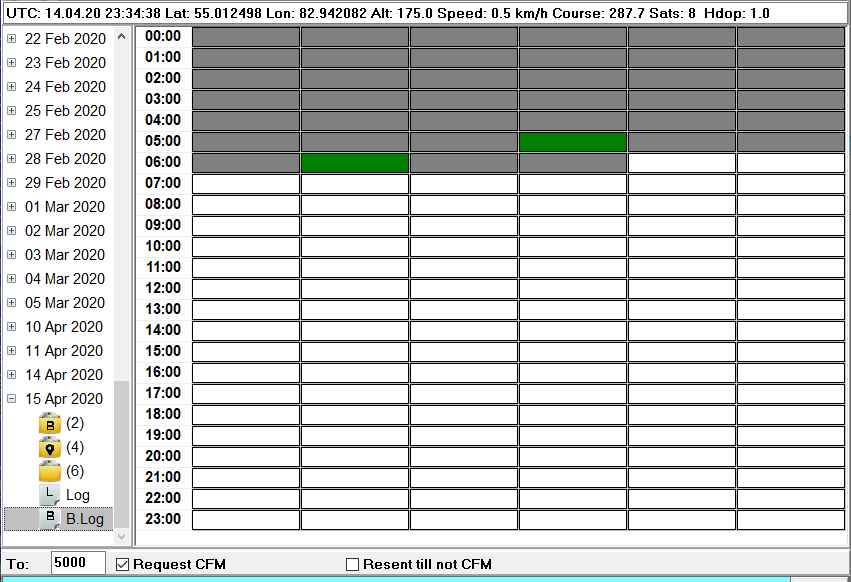 Double-click on a message in the program window opens this message by an external program.

Right-click on the icon in the tree or on the message brings up a context menu with additional commands.

At the bottom of the program window there is a field for entering a new message and additional controls.

If the "Request CFM" option is enabled, the recipient program will generate an automatic message about successful reception (or about a reception error).
If the option "Repeat til not CFM" is enabled, the message will be repeated until confirmation is received or the number of attempts has been exhausted (five times).

The windows appearance can be changed via the "Setup / Fonts & Colors" options.

The number shown in the "UpB:" field of the status bar shows the number of captured but not processed buffers of sound signal. If it is increases  to five or more the speed of the computer is not keep up. Try to reduce the number of simultaneously running programs or replace the computer :-).

For TX/RX switching you can use the transceiver's VOX or a simple circuit connected between the COM- or LPT-port of the computer and PTT input of the transceiver. Some USB interfaces can be used also. The simplest schematic of a PTT interface is shown below. When LPT-port is used, a good way is to use a pin that has low voltage level after a computer reboot. 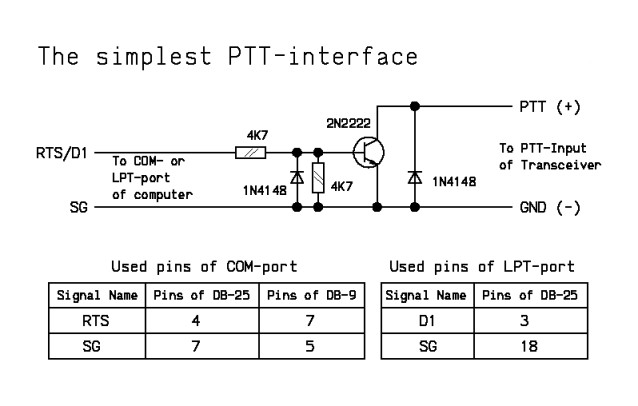 Port type and operation are defined by options on the  "Setup/Interface" page. 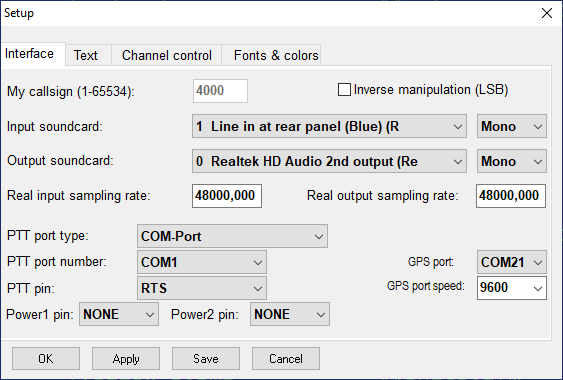 The "PTT port type" is used to define the hardware port type being used for transmitter control.
Available values are:

LPT-port can be used under 32-bit versions of Windows only.

The "PTT port number" list defines the port number. If device is connected to USB-port, virtual COM-port number is used there.

HF Pager can not recognize non-standard LPT-port address, for example if PCI LPT-adapter is used. Use "LPT at address: NNNN" option in this case, where NNNN is hexadecimal base address of the LPT-port.

By default soundcard is used in mono mode, but the "Mоno - Left - Right" option at "Setup / Interface" page can be used to select left or right channel of soundcard.
So one of two sound sources connected to a single soundcard can be selected. In this case a card works in stereo mode. The choice of a signal source (line in or microphone input) and record and output levels are made by the OS ("Volume control" in the system tray). When you select input and output levels check again that you do not overload the inputs of sound card and transceiver. Another "Mоno - Left - Right" option defines used output channel of soundcard.

Take to attention that soundcard input parameters are defined by Recording options. To change recording options, double click on "Volume" icon in tray,
then go Option->Properties->(Recording; Show the following...; OK)-> ...

How to use the HF Pager Windows version with Linux:

Though the software has been exclusively designed for the Microsoft Windows operating system, it has be used with some Linux distributions, but there is absolutely no guarantee that this will work. It was successful tested with Ubuntu Linux 20.04 LTS, however.

In order to have HF Pager running in Linux, install the "Wine" emulator and the additional software package "winetricks", using Synaptic or any other package manager privided by the Linux distribution. Then download the Windows HF Pager software ZIP-file to your Downloads directory and extract the installation file ("setup.exe") . Open a console window and enter:

Follow the instructions of the installation file. After installation, start the program by double clicking on the program icon. In the Setup menu choose "O PULSEAUDIO" as the soundcard. If your Linux distribution does not use the Pulseaudio sound system, choose and try other soundcard options offered. Usually one of them will work, which is indicated by the waterfall display. HF Pager can now be used.

Please note that we are in no way responsible for any damage to your Linux system that may occur.